CHEMTRAIL RIDGE:    The View from My Place   “Chemtrails” are a popular name for the very visible effects/results of planned and managed Atmospheric Aerosol Spraying.  These spray trails have long been known to contain the debilitating toxic metals barium; aluminum and nano-aluminum; and strontium. Nano, by the way, is 1/80,000 the diameter of a human hair.  Eeentsy, weentsy, tiny.  Now, neuro-toxic means dangerous to, poisonous to, or deadly to your brain; your central nervous system and all it controls; your spinal cord; your nerve-muscle interchanges. Nano-aluminum is a neuro-toxin that easily crosses the blood brain barrier, lodging deeply inside the furrowed brain tissues (as well as in the rest of the body, ie, liver, kidneys, lungs, intestines, heart, etc.)

Reprinted from the 2017 hurricane season.  And how was it that “they” were able to tell you that “Michael” in 2018 was not going to stall over the coast of Florida – as did Harvey in Texas last year – but was going to move up the southeast rapidly…?   WEATHER WARS. WEATHER WEAPONS. SURPRISED? I cannot tell you 100% that our recent hurricanes were magnified and steered into population centers. But I can tell you 100% that they certainly could have been magnified and steered into those population centers. Readers here are generally ahead of the curve. It’s one of the reasons you read here. A bunch of you have encountered the awkward, somewhat unfriendly word “Geoengineering”. It is sometimes written more phonetically as GeoEngineering. It can seem a mysterious word but it’s really simple to break down: “Geo” refers to the earth and its attributes. “Engineering” translates to “screwing around with”. I told you it was easy. Dave Hodges of The Common Sense Show writes the following in a recent article titled, “HOW MANY COINCIDENCES MAKE A CONSPIRACY?”: “First there was Harvey, followed by Irma, next is Jose and that will be followed by Maria. And there are more to come. I marvel about how many people do not know about the publicly available information on weather modification programs.” His article was accompanied by this four minute video and this suggestive photo of Irma and Florida. Scientists do not call hurricanes hurricanes. No, they call them cyclones. Well, good enough. And this cyclone looks like it’s wound up and ready to clobber Florida – which it was. And did. 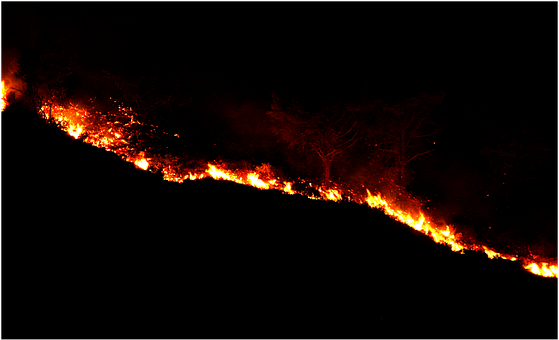 THE FIRE IS COMING OVER THE RIDGE. YOUR HOME IS DIRECTLY IN ITS PATH.[/caption]

It’s 3:37am. The fire is coming over the ridge. The wind is at its back. And your house is directly in its path.

The kids are already at Gramma’s. So is the dog. And the parakeet.

Your wife takes your hand and says as bravely as she can, “It’s time, Honey. We still have each other. And we can always rebuild.” A silent tear wends its way down her cheek. You take her hand, stroke her cheek, and head for the car……. One last look in the rearview mirror. Goodbye…….

All over our West Coast this scene has replayed itself time after time, tragedy after tragedy, with some not ending so happily – if you can even call total utter destruction happy… 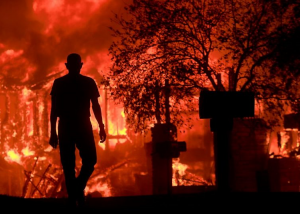 The firefighting experts are saying these fires are different, more violent, more explosive. They’re leaping too quickly. The smoke is choking, the heat too intense. Green healthy trees shouldn’t go up like that. The weather is too dry. And hot. Where’s the fog? And each new fire has the frightening potential of being the “worst fire in history”. 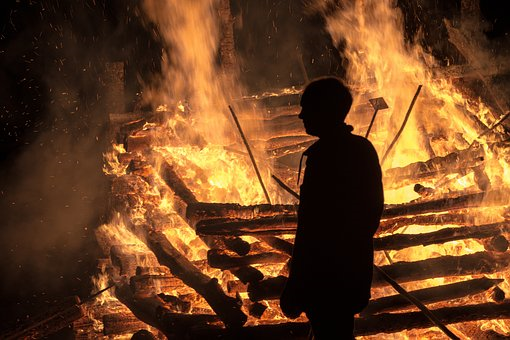 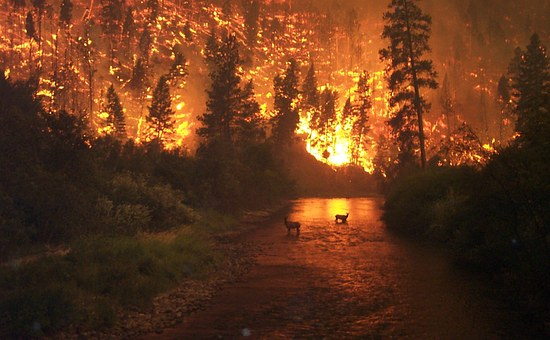 NEITHER MAN NOR BEAST IS SAFE AS FIERY SPARKS ACTUALLY FLY THROUGH THE SKIES. (Continue Reading)