On November 20, 2020, the Supreme Court announced new assignments of its Justices to the various Circuit Court Districts.

“A circuit justice is primarily responsible for emergency requests (for example, an application to block an execution or to allow it to go forward) from the geographic area covered by his or her circuit, as well as more mundane matters, such as requests to extend filing deadlines.  However, justices can and often do refer significant emergency requests to the full court – a role that has taken on increased importance in recent years with the sharp uptick in activity on the court’s “shadow docket.”  [Emphasis added.]  A map of geographical regions covered by each circuit is available here.” Below is that map. 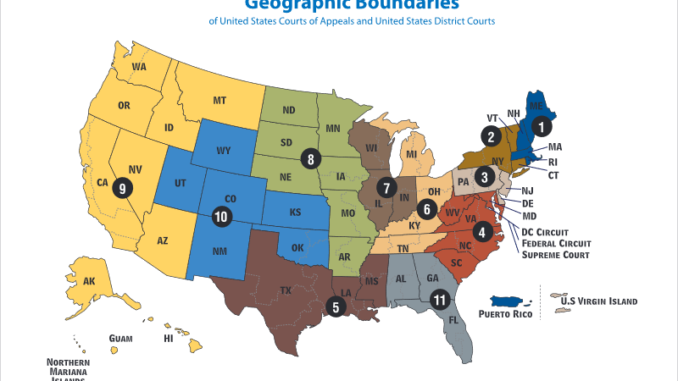 Following is the list of the justices and the circuit courts.What is noteworthy here is the assignment of primarily conservative justices to the swing states.  This might make the election fraud road to the Supreme Court just a tad simpler.  (See update below.)  Here is the list:

(ORDER LIST: 592 U.S.) FRIDAY, NOVEMBER 20, 2020 ORDER It is ordered that the following allotment be made of The Chief Justice and the Associate Justices of this Court among the circuits, pursuant to Title 28, United States Code, Section 42, and that such allotment be entered of record, effective November 20, 2020.

For the Third Circuit, Samuel A. Alito, Jr., Associate Justice,

For the Fifth Circuit, Samuel A. Alito, Jr., Associate Justice,

UPDATE:  On December 11, 2020, 7 of the 9 justices declined to hear the TEXAS case that challenges the constitutionality of the voting process in 4 other states.  The only 2 dissenting were Alito and Thomas.  Notice the glaring absence of the 3 new justices.

So far no court has listened to any evidence, of which there is plenty.  All the cases are thrown out based on timing or technicalities or alleged insufficiencies.

Generals Flynn and McInerney are recommending martial law and military tribunals.  None of this bodes well for America.

Be prepared.  Be attentive.  Be American.

Hug someone you love.

Made the Arab trip where he told their leaders bluntly, “You have a problem you need to address!”

Has diminished and contained ISIS.

Dumped the UN weather hoax Paris Climate Accords. (U.S. has already lowered its CO2 more than any other country on earth.)