FASCISM: You are allowed to manage and ‘own’ ( pay all the bills ) a company, while the Government makes all the rules and decisions.

SOCIALISM: The Government owns everything and also makes all the rules and decisions.

Q:  Would you call the two following articles Fascism or Socialism?

Q:  Would you like your government to have this control?

California on Sunday became the first state to impose a “gender quota” on corporate boards.  The controversial bill, which applies to all companies headquartered in California – even if they are incorporated in another state – requires publicly held companies to hire corporate directors based on gender.

Concerns Raised On Abundance Of Beehives In County 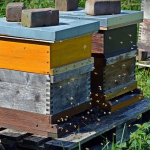 The Coos County Beekeepers Association raised concerns to County Commissioners last week upon witnessing an influx of beehives come into the area and their worries on overcrowding and harvesting.

“We don’t want them here and people need to pay attention to this.”  … “They take their bees back and then we’re left with not much.”

GOOGLE: News Target  07/15/2019 / By JD Heyes Peter Thiel, co-founder of PayPal, blasted fellow Silicon Valley giant Google during a speech at the National Conservatism conference in Washington, D.C., over the weekend for agreeing to work with Communist China and shunning technology projects involving the U.S. military.   As he opened his speech, the billionaire investor cited Google’s attempts to work out a deal with Beijing to develop a tightly-controlled search engine after letting lapse a U.S. Defense Department contract that would have given the American military access to the company’s powerful artificial intelligence tools.

They Want US To Be A Subservient ‘Nation State’

The United Nations was established October 24, 1945 by a war-torn weary world. Their purpose was to be establishing a world of peace through mutual agreements. To create the simple goal they started with, they have created many many thousands of pages of rules, regulations, treaties, agreements, etc. which would govern every possible aspect of our lives: ie, education, transportation, immigration, finance, manufacturing, justice ….