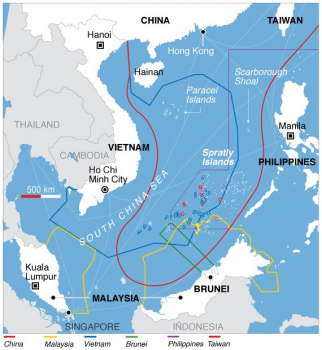 1. The South China Sea  international waters shipping lane  is the busiest  in the world.  That certainly would influence shipment of goods to and from countries that might interest you both job wise and as a buyer.

2.  China appears  to be claiming the entire area as it’s own.  In fact China fired 6 warning shots at a US military plane that flew over the area. Additionally the Chinese have stationed their one aircraft carrier in the South China Sea. They have also stationed their aircraft carrier killers at either end of the South China Sea as the United States sends an unprecedented 3 carrier task force into the region.

3. China is not only reported to be claiming the waterway as its own, but is building islands in the area some of which are being  stocked with missles.

4.  Malaysia, Brunei, Indonesia, Vietnam, Japan, China, and the Philippines all have a personal serious interest in the South China Sea not to mention all the other world countries that have shipping access concerns .  (See the map above.)

5.  President Trump is obviously trying to diplomatically work with a very serious international situation.  The following 7 1/2 minute video will connect you with  an excellent overview.  <> https://youtu.be/luTPMHC7zHY